Raspberry Pis are lots of fun. Here is another example - I've decided to make small Kubernetes cluster with my Raspberry Pi4s. Here is how it started.

And then Pi4 with 8GB came and shifted all one step down: 8GB version become full desktop with 64bit Raspberry Pi OS, and 4GB was 'demoted' to potential server. And then the idea occurred to me:

Why not make small cluster of Raspberry Pis!

That would achieve several different things at the same time:

(*) some 14-15 years ago I decided it is easier to make Java implementation of (inbound) IMAP and IMAP servers (on my Spring based app server) in Java than learn how to configure existing software to do the same.

Note: This blog post is not 'how to' recipe - more like (not complete) recording of the journey I've been through. And reminder if I need to do it again!

Since already have 2GB and 4GB versions of Pi4, adding another 4GB version would make a nice master/workers setup.

So, it ended up with:

SSD and enclosure I already had from my desktop pi (I've got another, 1TB for 8GB Pi4 version), short network cables I taught muy son how to crimp himself, 2GB and 4GB Raspberry Pi 4s were already at hand and power supply, switch and another Raspberry Pi 4 were that expensive on their own.

Plus, we had offcut of 12mm plywood in the shed - just asking for DIY projects.

I've put several constraints on myself - for no particular reason but because it seemed reasonable.

(*) SSD in the worse case scenario has throughput of 2000Mbit/s, gigabit ethernet has maximum of 1000Mbit/s, ordinary SD cards around 200-500Mbit/s (I know there are 1000Mbit/s or better SDs, too) - so, reasoning is that if everything is on network, there'll be contention of around 1/3 of 1 Gbit/s - which is still in range of most SD cards anyway.

(**) Nice to have is for master to proxy all network so services are seen on static IP or domain name, so no need for one to know which particular worker node service is running. Even nice would be for same constraint to say but handing of where is which service to be in router and all of that managed/orchestrated by the cluster itself.

There are a few options how to install Kubernetes to Raspberry Pi and Microk8s seemed the simplest: it is installed by snap and there are virtually no other need for any configuration and/or setup.

But, it works on 64bit OS only and most (if not all) online how-tos are deployed on 64bit Ubuntu or similar, but as I stated before - since 64bit Raspberry Pi OS is available (even though it is in beta at the time of this blog post) - so why not!

First fail in all the setup was booting of SSD. JMicron's chipset (152d:0562) and Raspberry Pi booting didn't like each other and in order to move on I've just brushed it aside. Some old, semi broken SD which can hold vfat boot partition was enough to boot the rest from SSD. Not a big deal. JMicron chipset seemed like it needed quirk mode set and at the end provided with 2000Mbit/s throughput which was acceptable.

Setting up TFT was easier - there's tftpd-hpa package already in the repo and by default configuration it already points to /srv/tftp.

Only thing I've changed in /etc/default/tftpd-hpa was to add --verbose (really good for debugging) in `TFTP_OPTIONS':

Main issue with tftpd-hpa was the service being brought up at the start up. It has an entry in /etc/init.d/tftpd-hpa and no matter what I tried (as explained here) it just didn't work (probably my fault) until I caved in and did the dirtiest solution and added sleep 10s to /etc/init.d/tftpd-hpa in do_start() function just before:

Also, as per Raspberry Pi Network Boot Documentation and Pi 4 Bootloader Configuration I've created directories under /srv/tftp/ with mac addresses of workers (which I have previously, just for a good measure and easier debug, assigned to static IPs on local router). For instance: /srv/tftp/dc-a6-32-09-21-c1. Warning: somewhere in documentation it showed that directory with mac address name should have upper case letters, but that was wrong.

Those directories would populated with content of /boot partition of 64bit Raspberry Pi OS image. Only change needed there was in cmdline.txt (as per above documentations):

That way I can have as many worker nodes booting separately from the same server.

Also, as you can see from the paths, I've created /srv/tfpt/cluster-w<worker number> directories where I copied root partition from OS image:

From there I had to update /srv/nfs/cluster-w2/etc/fstab to something like:

and update /srv/nfs/cluster-w2/etc/hostname accordingly. Cannot remember if there was anything else needed at this point.

As per Pi 4 Bootloader Configuration, I've created separate SD card to configure existing Pis for network booting and followed their instructions. The only major difference was that I decided not to use DHCP server (yet, another one inside of network that already has one) but TFTP_IP config parameter. So I've amended bootconf.txt to look like this:

and that was enough for worker nodes to boot off master's TFTP and NFS. Of course I had to repeat the process with booting worker nodes with SD card, updating EEPROM before they booted off the server. Enabling --verbose to tftpd-hpa was helpful - each time I didn't do something right I was able check how far it has gone...

As I originally said - it was supposed to be zero conf, easy to install. So:

Next to microk8s I've installed docker and added pi user to both docker and microk8s groups:

On all three Raspberry Pis (master and workers) I've got Microk8s running. But, as separate, stand-alone node. Adding nodes to master (control plane) is really easy with microk8s too:

Also, I've got down some gotchas as well. The worse was when I tried to exclude master node from scheduling and left cluster from it:

from master node. Strangely enough - all continued to work well but logs were spammed with errros. See here.

To avoid master being used as node in the cluster (as it has only 2GB memory and is meant for other things) I've dropped down to only cordon it:

(master node name was retrieved with kubectl get nodes)

But, that's not enough. containerd was failing due to some issues with snapshotting. After more research I've got to two conclusion:

First is easy to be fixed. In /var/snap/microk8s/current/args/containerd-template.toml I've changed

As for second problem...

This issue helped me to understand what is needed - CONFIG_CFS_BANDWIDTH=y in kernel config.

So, next was to recompile kernel so Kubernetes can work. I've followed original Pi documentation for [Kernel building] (https://www.raspberrypi.org/documentation/linux/kernel/building.md) and got it relatively painlessly done on my desktop pi (and master node - whichever is more convenient).

Things I've learned in the process:

Installing kernel was as simple as copying ./arch/arm64/boot/Image to /boot/kernel8.img (and on my SD card on master node) and /srv/tftp/<mac-address>/kernel8.img, copying overlays to /boot/ and /srv/tftp/<mac-address>/ as per above documentation and copying modules. I've installed them copying whole built kernel source and result to master using sudo make modules_install and then copied them from /lib/modules/<new modules dir>-v8+ to /srv/nfs/cluster-w<worker-no>/lib/modules/.

I'm sure there are easier ways to do all of it. But in general - just installed newly built kernel to master node and all workers (by copying appropriate files to local SSD's root FS).

Now back to microk8s config...

One of the thing that came out of it is setting up iptables - output of the instruction is going to enough. But, those changes never persisted on Raspberry Pi (debian based) OS. In order to make them stay (FORWARD ACCEPT) /etc/sysctl.conf needs to have net.ipv4.ip_forward=1 uncommented.

Up to this stage I've got microk8s running and scheduling containers on worker nodes, but not master and all log files (/var/log/syslog) on master and workers are not spammed with errors constantly.

Next was to sort out other constraints. First was accessing services (deployments, pods) seamlessly. After some more research I've learnt in order to have LoadBalancer service working under Microk8s one needs to 'enable' metallb (and here).

But, for it to work, it needs to be configured in such way that local router (Draytek 2960 in my case) knows about it and metallb can access router's BGP (Broad Gateway Protocol), too. So, I've created metallb-conf.yaml:

Next was to 'install' Microk8s dashboard:

and added new config dashboard-lb-service.yaml to expose it locally on 'static' IP (which I associated domain name in the router):

After that I could easily create persistent volume on nfs just by (for example):

Remeber that I had

in /etc/exports file - exposing /srv/k8s/volumes directory (and all sub directorties) to (only) worker nodes and other machines in given IP range.

Microk8s has helper config for setting up docker repo on local nodes and can be easily added by:

but, unfortunately, it uses hostPath to store persistent volume, which means it is only on local filesystem and is removed when pod is removed. I wanted something more persistent and to know where images are stored. So, I've copied /snap/microk8s/current/actions/registry.yaml to home dir and amended it a bit. First I've added registry-nfs-storage.yaml:

(see - added volumeName and changed storageClassName). When applied both:

Now I was able to delete and re-install deployment for registry and play with all without need to push new image to that registry again and again. BTW as registry is deployed with nodePort service it is simultaneously available on all nodes including master node. So, to push the new docker image I've followed this:

where cluster-master is domain name associated with my master node.

as many tutorials suggest. I've created ~/.bash_kubectl_autocompletion.sh file by:

After that I can use kubectl only plus I have completion after using kubectl. Most noticeably namespaces and deployments.aps and pods are autocompleted, too.

More Gotchas And How To Fix Them

For some reason I've got many issues (mostly involving flanneld and etcd) and one particular error I fixed by starting microk8s as root (even though user pi is in microk8s group).

Also, at some point workers developed:

for some reason. After another research using favourite search engine I've got to:

which just fixed it. flanneld

Last error I wrestled with was with containerd on one of the worker nodes complaining that it cannot remove container:

The rest of the cluster was fine and no issues were seen but the logs that were swamped with errors as above. Fix for it was to temporarily stop containerd and remove offending directories. Note: there was more than one that failed so I needed to pick them all from the logs and do:

As per my son's idea - we've mounted all on the board and hanged it on the wall: 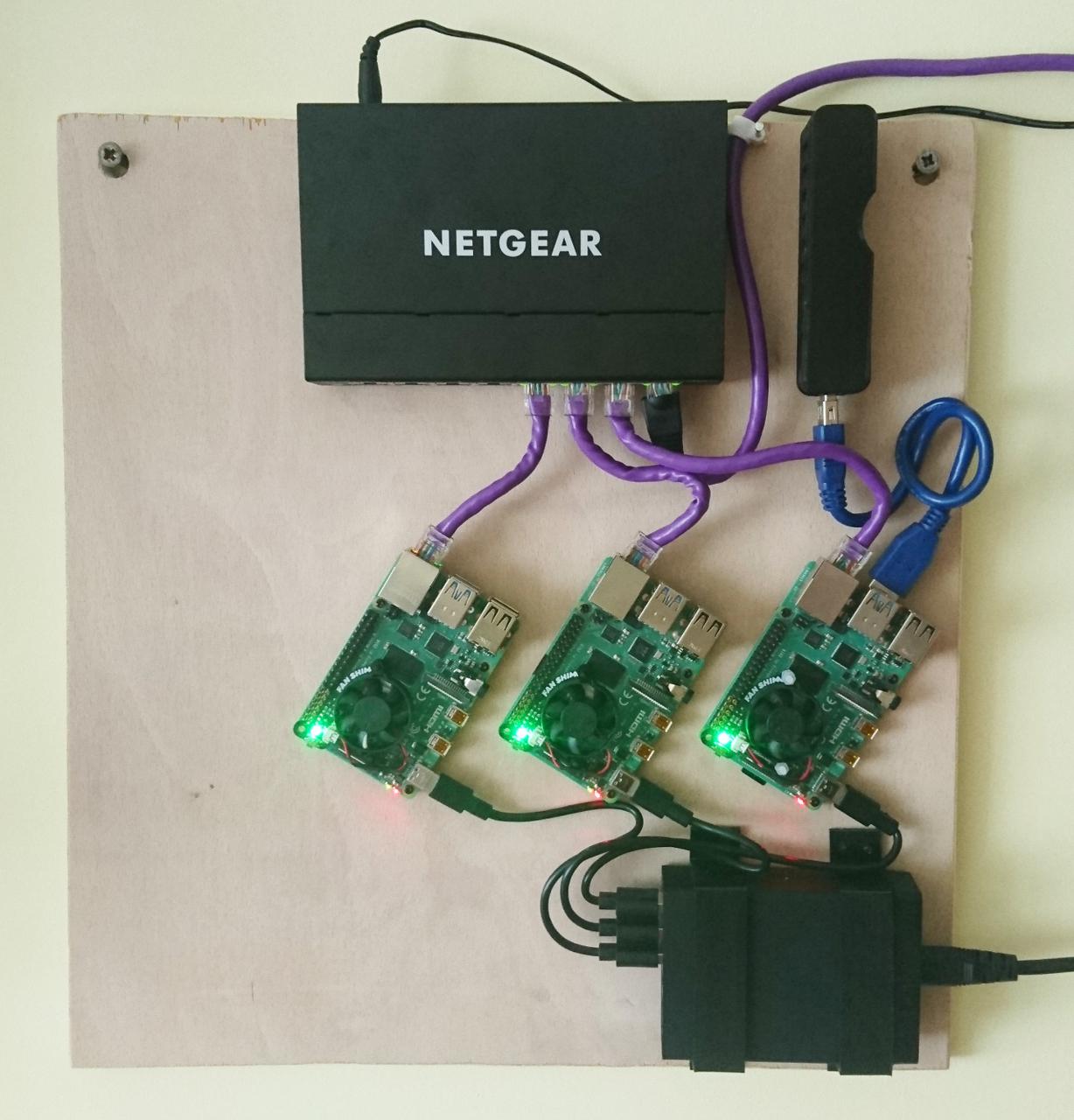 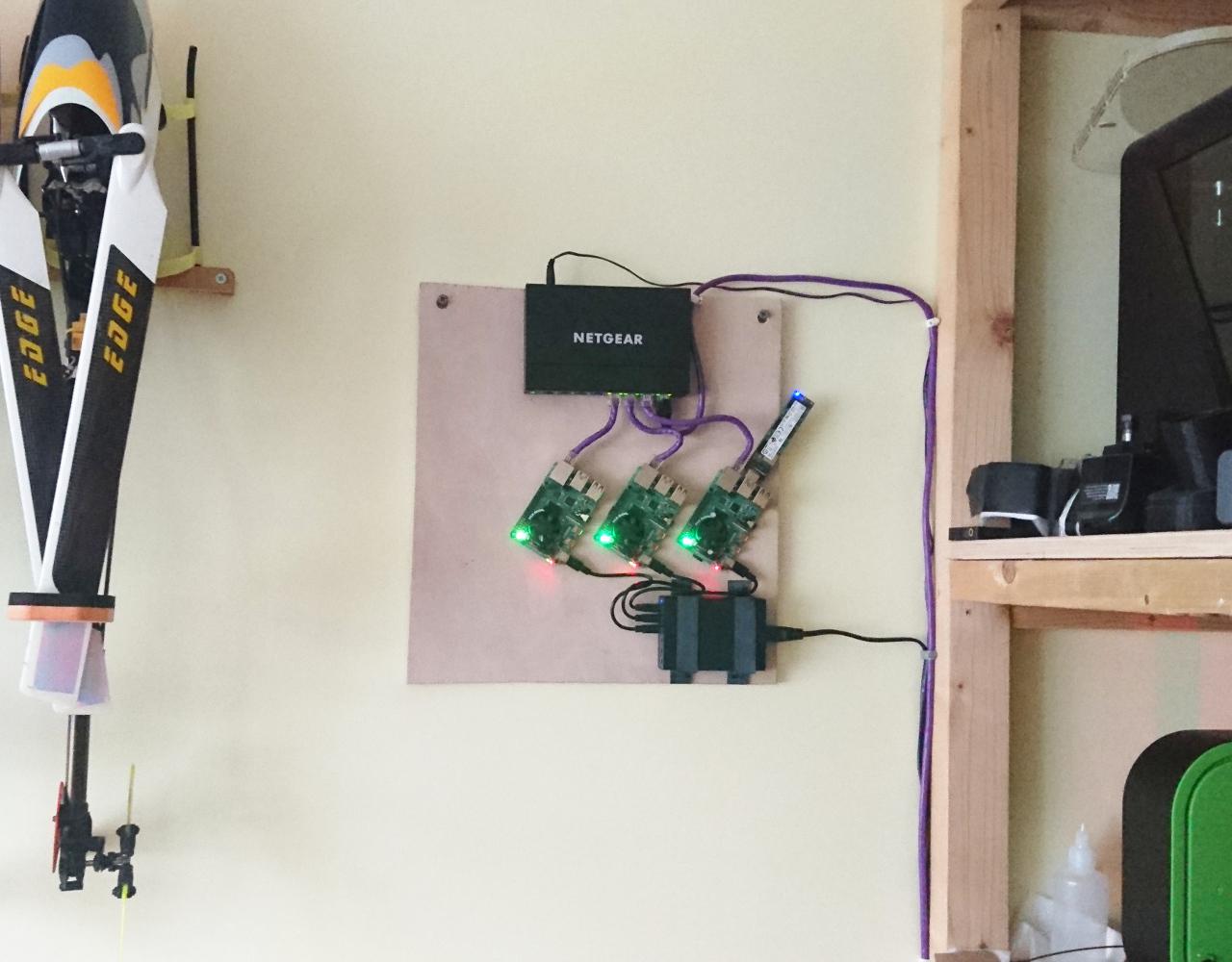 Small USB3 extension cable is to be added to the picture. Also, as you can see there's speace for the 3rd worker and some spaces next to the switcha nd power adapter - for future expansions.

As a bonus, I've decided to move whole cluster to 'dmz-lan'. I've dedicated whole port on the Draytek router for it, configured separate network (lan on 192.168.4.0/22 with 192.168.5.0/24 inside of it for 'static' IP dedicated to particular services) and set firewall filtering so my home network (lan) can access DMZ one but not otherway round. Except for carefully selected services and only when needed.

This exercise lasted slightly longer than a week and produced nice, small, manageable kubernetes cluster. Ideal for playtesting different solutions and such. It has scope for extension and aside of academic purpose will serve real life purpose - run various containers with services used daily.